Las Cruces resident Pat Gill, 80, lost her husband of nearly 58 years when he passed away last year. She still lives in the home they built more than 50 years ago, but it was in need of cleaning and repair and she was unable to get everything done on her own. While she was wishing for help, Las Cruces residents Jason and Amber Black were searching for a widow they could help as part of a Both Hands project to raise money to adopt two orphan boys from Africa.

Both Hands is a nonprofit organization based in Brentwood, Tennessee, that helps Christian families throughout the country raise funds for their adoptions in exchange for fixing up a widow's home. The family must find a widow with a great need in their community, then gather a team of volunteers who send letters asking others to sponsor them for their day of service. The Blacks said they found Gill though a friend at church. 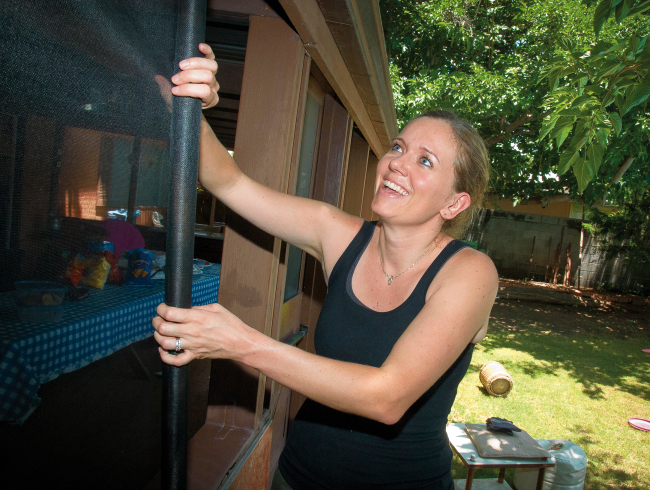 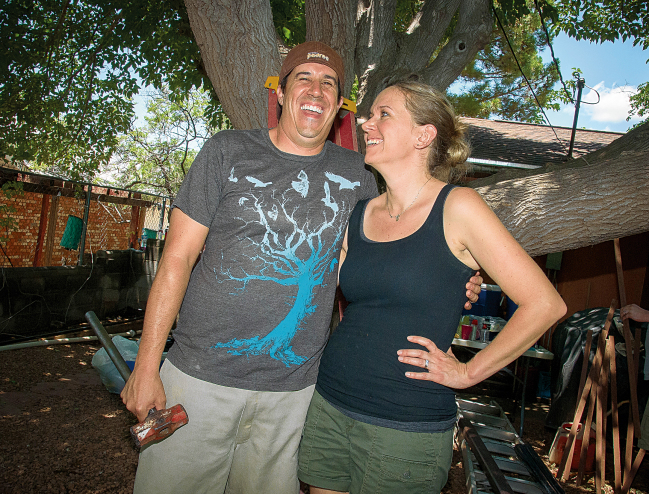 "A friend of Amber's knew Pat and we got to meet her and found out when we met her that the night before, she had actually prayed that someone would help her with these things around the house," Jason Black said.

Gill's prayers were answered on July 11, when 58 people ranging in age from 3 to 64, including a few children adopted with funds raised through other Both Hands projects, came together to help clean and fix up her home. A few days after working at Gill's home, the Blacks had raised about $3,000. Before the Both Hands project, the Blacks had raised close to $20,000 on their own. They will need $50,000 to pay for their adoption effort, Jason Black said.

As part of the project, a video of the work done at Gill's home will be posted on the Both Hands website and Facebook, where they hope it will generate even more donations, Jason Black said.

The Blacks and their team started working on Gill's house at 8 a.m. and stayed until about 4:30 p.m., cleaning chairs and tables, the carpet, curtains and making minor household repairs. They also built her an enclosure on wheels for her pool equipment and did yard work, Gill said. "They did a very thorough job of making my house look all spic and span," she said. "I wrote in my 'thank you,' it would have taken me a year to do what they did in one day."

The Blacks, who have four daughters, said they always had their heart set on adopting, but decided to set the wheels in motion when their good friends went to Africa and sent them pictures from their trip. Many of the pictures featured orphans, and the Blacks saw a need to take action, so they reached out to an orphanage and were paired with the two boys who will soon join their family. 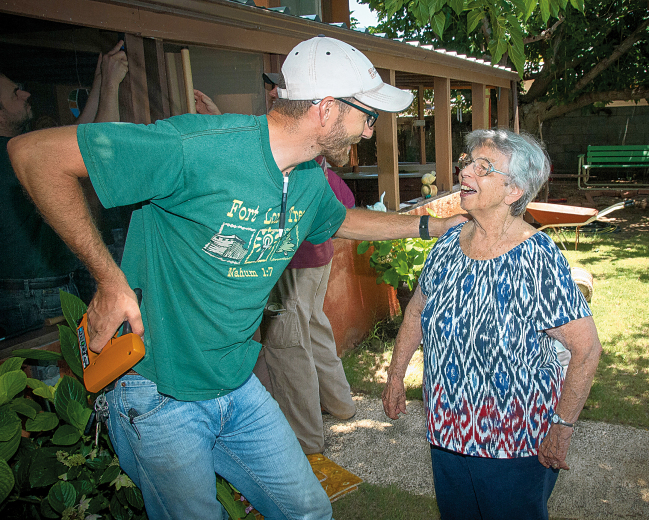 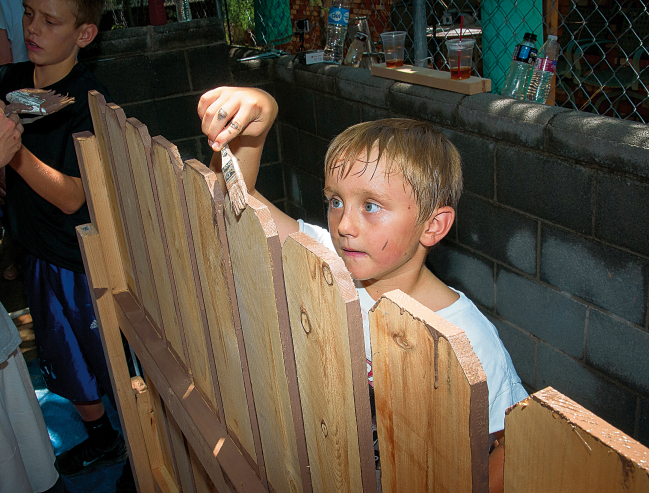 Left: Dustin Leonard talks with Pat Gill at her home which is being repaired with the help of the Both Hands organization. (Jett Loe — Sun-News)

Right: Davis Coyle, 8, paints a fence at the home of Pat Gill for the Both Hands organization. (Jett Loe — Sun-News)

"We have two sets of friends who have adopted and we found out about (Both Hands) because one of them did a Both Hands project, and it's a great opportunity to raise funds for adoption," Jason Black said. "When you're fundraising, there's so much asking for stuff and it's a hard thing to do, and we have to realize we're not asking for it because we need kids, it's because ultimately, there are kids who need a home. That's where we get the confidence and willingness to ask people for things."

Jason Black said fundraising through the Both Hands project also gives them a chance to give back by helping someone in their own community.

"We find that so many people are so willing and excited to help, and it's an opportunity to give in the midst of fundraising, when you're asking constantly," he said.

Both Hands was founded in 2008 by J.T. Olson in Tennessee, who came up with idea after asking a friend to sponsor him in a golf fundraiser. His friend wrote back and said, "If you were working on a widow's house, I might sponsor you, but you're just golfing. Nice cause, but not my money." This response stuck with him and a few years later, when another friend told Olson he was going to adopt four orphans from Moldova but didn't know how he was going to raise the money. It started a project that eventually became the core foundation for Both Hands.

"At Both Hands, we don't take any money out of the funds we help families raise for our operations," Olson said. "I chose to set it up that way and we raise our money separately."

Since Both Hands started, the organization has completed more than 490 projects in 40 states, helped more than 530 kids who are no longer orphans and about 530 widows, Olson said.

"Being on a project is great because everyone is walking around with smiles on their faces," Olson said. "Everybody wins — the widow wins, the family wins, the orphan wins, the people who give their life away for the day win and all the people who sent money in to sponsor workers win."

For information about Both Hands and Jason and Amber Black's adoption story, visitbothhands.org or visit Both Hands Foundation on Facebook. The Black family video can be viewed at vimeo.com/133565441.

This article was written by Alexia Severson of the Las Cruces Sun-News. The article can be viewed HERE: http://www.lcsun-news.com/las_cruces-news/ci_28501335/both-hands-helps-families-raise-funds-adopt Alexia Severson may be reached at 575-541-5462.