Becks Family: All Hands On Deck 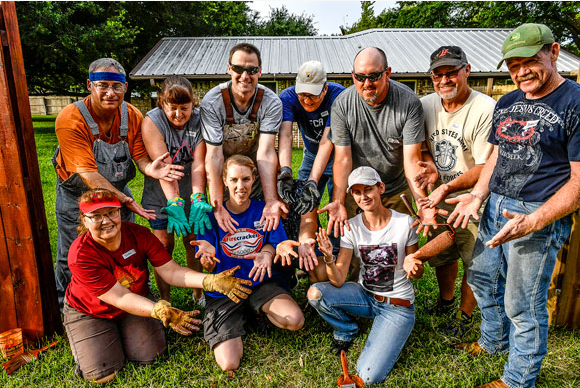 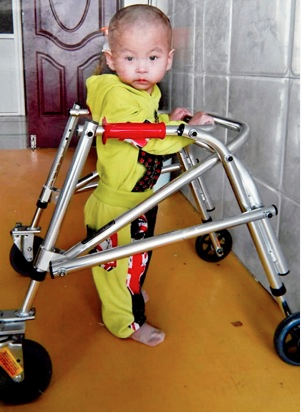 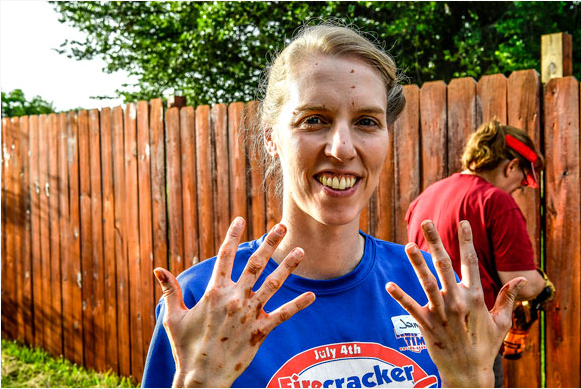 On Saturday (7/16/16), a group of volunteers gathered at the home of Mendy Wray, a Decatur widow. They were there to help her stain her fence and to pick up a few other odd jobs, but they were also there to support the Becks, a family in the process of adopting their second child, a little boy named Ryan, from China.

The Becks, Jaime and Gary, decided to raise money for their adoption through Both Hands, a faith-based fundraising organization. Jaime explained that Both Hands works sort of like a fundraising 5K, only instead of donating money for completing a run, donors give to couples who complete projects for widows.

The Becks first heard of Both Hands while in the process of adopting their first child, Shawn, from China. They’d been saving money for Shawn’s adoption for years, so they didn’t need help fundraising at the time.

Ryan’s adoption was different. The Becks had gone though three other referrals that didn’t work out before they were sent a picture of a baby, Ryan, in winter of 2015. Jaime opened the email with Ryan’s referral after Gary and Shawn had gone to bed one night, and she immediately knew this was the child they were looking for.

Gary, of course, agreed that they needed to adopt Ryan, and the Becks were formally matched with the boy May 28 – exactly four years after they were matched with Shawn. But while the couple had saved for Sean throughout the early years of their marriage, they didn’t have nearly as much time to do so with Ryan. And adoptions, especially foreign adoptions, are expensive – it will cost the Becks $10,000 to bring Ryan home.

“With Ryan, we didn’t have 10 years of savings. We’re like, ‘OK God, we know You want us to adopt again,’ so we just stepped out and said this is what we have to give financially, but we have our whole heart to give emotionally,” Jaime said.

“He has provided every step of the way, and we wanted to do a Both Hands project because we feel like that’s what God has commanded us to do, to serve the widows and the orphans.”

Both Hands’ philosophy is based on a Bible verse, James 1:27, which says “Religion that God our Father accepts as pure and faultless is this: to look after orphans and widows in their distress.”

Once they decided they wanted to complete a Both Hands project, the Becks mailed out 400 letters across the United States to potential sponsors. Then they had to find a widow, and that part of the task was more difficult than they had anticipated.

“It took us forever,” Jaime said. “It got to the point where we were like, we’re not going to do our project because we can’t find a widow.”

Finally, a friend recommended Mendy Wray, a secretary at CrossRoads Church in Decatur. When Jaime first spoke to Wray over the phone, Wray thought she was looking for someone to help set up an adoption.

“I was like, ‘I really don’t know who you would talk to,'” Wray said. “She explained it, and I was totally floored. The scripture that talks about taking care of the widows and the orphans, I never expected to be the recipient.”

Wray told Jaime she would pray about it, and eventually called back to agree to the project. Her fence needed staining, Wray explained, and because of a bad shoulder she couldn’t do it herself. The Becks jumped on board immediately, gathering volunteers and supplies.

Saturday was the main project day, but a group of the Becks’ friends and family have stopped by Wray’s multiple times to power-wash and stain the fence, mow her lawn, repair her screen door, put in a new gate to the backyard and put a new door on Wray’s chicken coop. All the supplies used to stain the fence and do the yard work at Wray’s house were donated by friends or companies that the Becks had solicited.

“I am thoroughly impressed with the idea and excited to be a part of it,” Wray said. “I’m so excited for them to get baby Ryan.

“This is a labor of love. It’s awesome to see the families and friends out there doing this, and the Becks are precious.”

As of press time, the Becks had raised $6,550 of their $10,000 goal. Donations will be accepted through Both Hands at their website, bothhands,org/project/beck-279, until they go to China to get Ryan, hopefully by the end of this year.

Ryan, who is not yet 2, has a heart condition called patent ductus arteriosus, that causes abnormal blood flow between the two major arteries of his heart. Once he’s in the United States, that will be fixed. The Becks also hope to help him gain weight, as he’s small for a child his age.

In the last picture of Ryan sent to the Becks, he’s learning to walk in the orphanage where he currently lives. The Becks are ready for him to pass more milestones with them in Texas.

“We are hoping to get him by this fall or winter,” Jaime said. “We are pretty excited. Shawn is very excited to get a little brother.”

This article was written by Racey Burden at the WiseCountyMessenger. The original article can be found here: http://www.wcmessenger.com/2016/news/hand-in-hand-parents-raise-money-for-adoption-through-service-project/