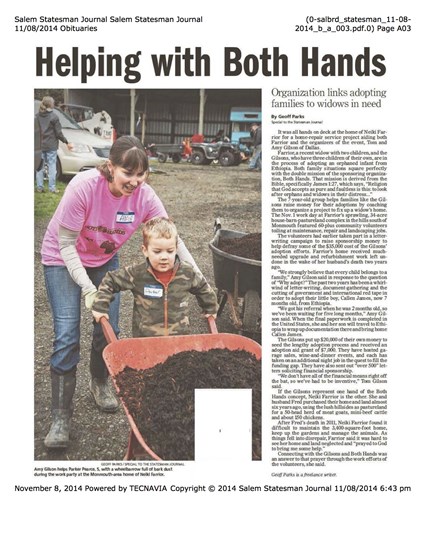 It was all hands on deck at the home of Neiki Farrior for a home-repair service project aiding both Farrior and the organizers of the event, Tom and Amy Gilaon of Dallas.

Farrior, a recent widow with two children, and the Gilsons, who have three children of their own, are in the process of adopting an orphaned infant from Ethiopia. Both families situations square perfectly with the double mission of the sponsoring organization, Both Hands. That mission is derived from the Bible, specifically James 1:27, which says, "Religion that God accepts are pure and faultless is this: to look after orphans and widows in their distress..."

The 7 year-old group helps families like the Gilsons raise money for their adoptions by coaching them to organize a project to fix up a widow's home. The Nov. 1 work day at Farrior;s sprawling, 34-acre house-barn-pastureland complex in the hills south of Monmouth featured 60-plus community volunteers toiling at maintenance, repair and landscaping jobs.

The volunteers has earlier taken part in a letter-writing campaign to raise sponsorship money to help defray some of the $35,000 cost of the Gilsons' adoption efforts. Farrior's home received much-needed upgrade and refurbishment work left undone in the wake of her husband's death two years ago.

"We strongly believe that every child belongs to a family," Amy Gilson said in response to the question of "Why adopt?" The past two years has been a whirlwind of letter-writing, document-gathering and the cutting of government and international red tape in order to adopt their little boy, Callen James, now 7 months old, from Ethiopia.

"We got his referral when he was 2 months old, so we've been waiting for five long months," Amy Gilson said. When the final paperwork is completed in the United States, she and her son will travel to Ethiopia to wrap up documentation there and bring home Callen James.

The Gilsons put up $20,000 of their own money to seed the lengthy adoption process and received an adoption aid grant of $7,000. They have hosted garage sales, wine-and-dinner events, and each has taken on an additional night job in the quest to fill the funding gap. They have also sent out "over 500" letters soliciting financial sponsorship.

"We don't have all of the financial means right off the bat, so we've had to be inventive," Tom Gilson said.

If the Gilsons represent one hand of the Both Hands concept, Neiki Farrior is the other. She and husband Fred purchased their home and land almost six years ago, using the lush hillside as pastureland for a 50-head herd of meat goats, mini-beef cattle and about 150 chickens.

After Fred's death in 2011, Neiki Farrior found it difficult to maintain the 3,400-square-foot home, keep up the gardens and manage the animals. As things fell into disrepair, Farrior said it was hard to see her home and land neglected and "prayed to God to bring me some help."

Connecting with the Gilsons and Both Hands was an answer to that prayer through the work efforts of the volunteers, she said.